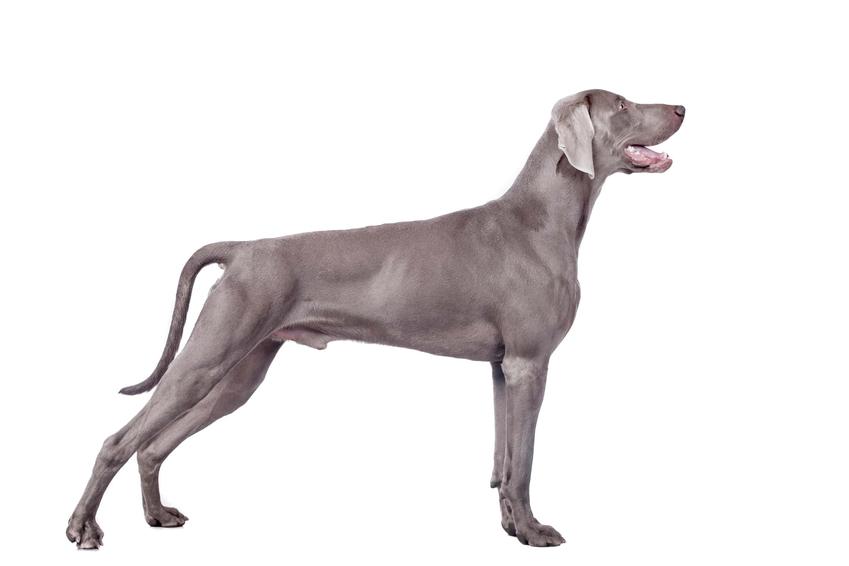 In the 19th century, Frederick Wilhelm Hohenzollern, the German emperor, issued a decree limiting the possibility of having a Weimaraner. From then on, the owner of a dog of this breed could only be a person of noble origin, documented for four generations. So a pedigree dog could only be in the hands of… a pedigree human. Today it is an obvious anachronism, and the Weimaraner is a popular and liked breed, especially by hunters.

For more advice and information, check out the purebred dog articles here.

Weimaraner (Weimaraner) – the origin and description of the breed

Historical overview of the breed

There are many hypotheses about the origin of the Weimaraner. The only established fact is that in the early nineteenth century the dog appeared at the princely court of Weimar. It was slightly different than modern Weimaraners, it was mainly used as a tracker. Only when these dogs, as “purebred” dogs ceased to be “reserved” only for hunters and foresters, began breeding focused on hunting versatility. This took place in the mid-nineteenth century in central Germany, mainly around Weimar and Thuringia.

Breeders began to associate tracking dogs (Leithund) with birds for birds (Hühnerhund), and the resulting offspring became the “base” for subsequent generations. At the end of the 19th century, the breeding books of the Weimaraner were established and pure breed breeding began, without adding blood from other breeds, focusing only on the utility and exterior values ​​of subsequent generations born in the existing genetic pool. That is why the Weimaraner is considered to be the oldest of all German breeds.

Meanwhile, at the beginning of the 20th century, long-haired puppies began to appear in breeding farms. Since long hair is recessive (giving way) to short hair, its disclosure is always the result of the offspring meeting in one pair of genes, one from both the mother and father, who carry the long hair gene. Initially, they were single puppies, but over time, when they began to enter the breeding, a population of the Long-haired Weimaraner was formed and now it is a separate breed. The Weimaraner in both types of hair is a typical hunting dog, subject to work duty.

The Weimaraner is a fairly large dog with a well-proportioned build. The brain is quite wide, wider in a dog than in a female. Marked frontal furrow, occipital tumor poorly or moderately developed, zygomatic bones well developed. Very slight stop. Nose large, protruding above the lower jaw, flesh color changing to gray. Long, strong muzzle, strong jaws. Nasal bridge straight or slightly convex, not sunken. The dentition is complete, scissor bite. The eyes of an adult dog are light or dark amber, blue in puppies (a characteristic feature of the breed), with intelligent eyes, round, slightly oblique. The ears are long, wide, reaching the corner of the lips, set high and narrow, wavy, rounded at the ends. The tail is set slightly below the topline, strong and well covered with hair. Lowered when at rest, carried horizontally or higher in action. It may be copied in working dogs, but only in countries where it is permitted.

The Shorthaired Weimaraner has a very dense and strong coat, longer and denser than most shorthaired pointers. There is either no or very little undercoat. The long-haired Weimaraner also has a soft and long undercoat without or a negligible amount of undercoat – 3 – 5 cm on the sides, slightly longer under the neck, on the chest and on the abdomen. A distinct feather on the tail, feathers and pants shortening downwards on the back side of the limbs. Short hair on the head and ears, velvety on the ears, long and wavy at the base of the ears, straight on the rest of the body, with a slight undulation allowed.

The color of both types of hair is different shades of silver-gray, the head and ears are a bit lighter. Basically no white, only slight white markings are allowed on the chest and toes. A darker stripe along the back is allowed. The most appreciated color is uniform all over the body, with only a slightly lighter head and ears.

The nature, care and health of the Weimaraner

Weimaraner is a breed of typical hunting dogs. His hunting passion is very strongly developed. It is a dog that is cut in relation to the game (although it never attacks), but it shows unlimited devotion to the owner and loves him above all, of course also other household members. She does not like loneliness, but loves to rest on the couch with her guardian. He shows friendly interest in his guests, shows a friendly disposition towards strangers, although he can also be distrustful. He gets along with other domestic animals, for example, he will not treat a cat as an “exercise toy”, but if he is to live with him under one roof, it is better to socialize it as early as possible, while at home, puppy breeders should have contact with other animals.

Activity, high demand for movement and love of water are typical breed features of the Weimaraner. Therefore, even living in the countryside or in a house with a garden, you need to provide him with at least two-hour daily exercise. This movement should be of an exertional nature (running) and it is worth taking the dog outside the city, e.g. to a meadow or lake, where he will be able to swim. Note: in the forest, it is strictly forbidden to let the dog loose in situations other than hunting. The Weimaraner is a good companion for a bicycle trip, after proper fitness preparation it can easily cover even 10 kilometers at a trot.

Weimaraner care is not complicated, only daily combing is needed during the molting period. Outside of this period, a soft brush or rubber glove every 2-3 days is sufficient. However, systematic ear control is very important. The Weimaraner has drooping ears and loves to swim. Moisture and heat favor the development of fungal and bacterial infections. After each trip, the ears should be cleaned with a cotton pad soaked in an antibacterial ear wash. From time to time, the condition of the eyes is checked, claws that are too long are trimmed (if the dog does not rub them himself), and the teeth should be cleaned of plaque to prevent the build-up of limescale. A Weimaraner bath is not necessary if it is not produced in the waste. Or maybe you will also be interested this article on the blue pointer?

As a dog that likes an active lifestyle, the Weimaraner should receive valuable food. Dry food is best if it contains about 30 percent. proteins (you must read the description on the label!). The price of good food is not low, but you should not save on proper feeding of your dog.

Some owners prefer natural nutrition. It is perfectly correct as long as the meals contain all the necessary nutrients and are properly supplemented. Remember, however, that food is given to the dog at least 2 hours before exercise (portion with a majority of carbohydrates) and at least one hour after exercise (portion with a majority of meat). Exercising on a full stomach and eating immediately after fatigue promote a stomach twist, which is directly life-threatening.

The Weimaraner, like all pointers, is a dog that primarily displays and retrieves birds, from land and water. Nevertheless, there are hunters who arrange Weimar pointers as tracking dogs, and these dogs also gather positive opinions here. But by nature, water and the field are the element of this race. The obligatory work of every pointer is, among other things, hitting the field and swimming after shooting. Weimaraners cope well in such conditions.

Only dogs and female dogs over 18 months of age, having passed shows with appropriate marks or a breeding inspection at the parent branch of the Kennel Club in Poland are allowed for breeding. There are different opinions about the point of going to shows, since you can pass a breeding qualification at once. However, it is worth taking into account that puppies from titled parents find buyers faster. In general, their price is also higher.