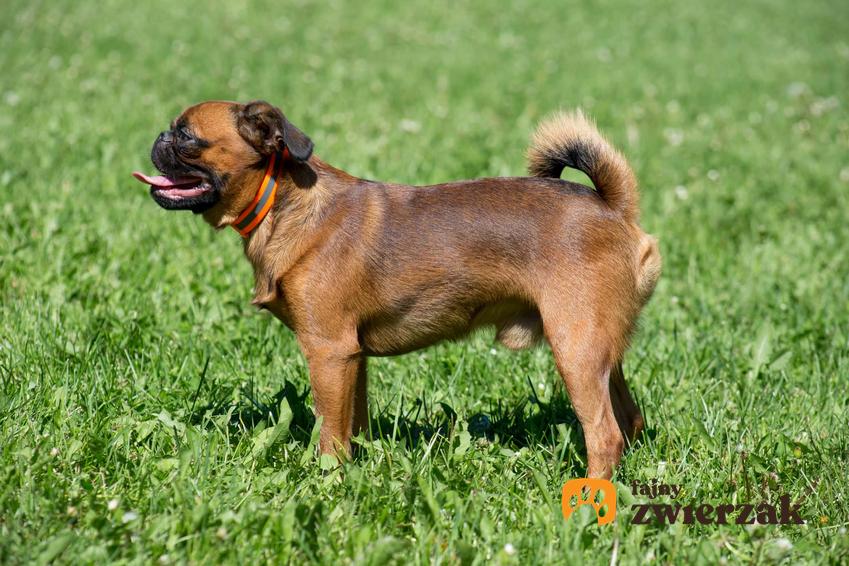 The Brabantian, or the Brabant Griffon, is one of the three Belgian Griffon breeds. In the taxonomy of FCI breeds, it is the only situation where individuals of three different breeds can be freely crossed with each other, and the born puppies are included in each of them – depending on the features of their exterior. Brabantczyk is the rarest of griffons. Let’s get to know him better.

If you’re looking for more tips and information, check out the Griffons articles here too.

A brief description of the griffon breeds

All griffons are small, mobile dogs descended from small wirehaired dogs called smousje. These dogs were kept in farmyards to exterminate rats in stables, coach houses and rooms where supplies were stored. Only in the nineteenth century, planned breeding began in order to improve the exterior of these dogs and obtain their purebred numbers.

Initially, the black smousje was associated with a red cavalier king charles spaniel (ruby), and then with a pug. As a result, three types were obtained, which were subsequently registered as separate breeds. Those are:

In all three breeds, the length of the muzzle does not exceed 1.5 cm, and the strongly recessed bridge of the nose forms one plane with the forehead and chin. Overshot is a feature typical of all griffons, the upper and lower incisors are straight, the lower jaw is wide and prominent, the mouth is always tightly closed, the teeth and tongue are invisible. The wide-set eyes are large and round, but never bulging, brown, the darker the better. Ears small, set high and wide. Uncopped, worn half-folded forward. attention: From 2025, dogs with copied ears and tails cannot be judged at shows under the auspices of the FCI. Griffons weigh from 3.5 to 6 kg, measure 24 – 26 cm at the withers. Dogs are slightly larger than female dogs.

Disqualifying defects for all griffons:

Male animals should have both fully developed testicles descended into the scrotum.

Brabantczyk is a typical companion dog. He is very attached to the caregiver, he is neither fearful nor aggressive. He likes children, towards whom he is patient and friendly, affectionate and gentle, despite his considerable temperament. It is a small dog, but very obedient and easy to arrange (such as a collie), so it is suitable as the first dog for people with no experience.

Brabantczyk is a very good choice for living in a block of flats because it is not barking. Gets along well with other pets in the home, including cats and other dogs. He needs the company of a human all the time, but is not intrusive. When traveling, he is polite and calm.

Sometimes a large dog (for example a collie or a perro de presa mallorquin) can arouse anxiety in a Brabantian, so it is important that puppies are well socialized as early as possible, at the breeder’s home. The Brabantian has a very curious disposition, so when walking where you can meet other animals, it is better to keep him on a leash and let him run out in a fenced area.

Unlike Brussels and Belgian griffons, the care of a Brabant fish is simple, because it has a short hair. It is enough to brush systematically every few days and wiping with a chamois leather. However, it is worth checking your ears and cleaning them regularly, as well as taking care of the teeth, because you like to deposit stone on them. If necessary, the Brabantczyk’s claws should be shortened, if he does not rub them himself. In addition, it is necessary to wipe the doggy with a moistened cotton swab over the furrow above the nose. If food debris gets in it, they can deteriorate and cause inflammation.

Nutrition of the Brabantian is important because it is a brachycephalic breed and the appropriate bowl should be selected for him to ensure the comfort of eating. Such bowls are available in good pet, stationary and online stores. However, the food should be specially intended for small breed dogs with fine granules. The Brabant Griffon can also receive home-made food, but then you need to remember about appropriate supplementation with calcium and vitamin preparations. The dog should have access to a bowl of water around the clock.

The Brabant dog is a very healthy, long-lived breed and a properly kept dog can live up to 17 years. He should be systematically vaccinated against all infectious diseases, of course obligatorily against rabies, and a week before the vaccination date, he should be dewormed. Show dogs should be dewormed more often. Also check this article on the Brabant Griffon.

When we start breeding a Brabant fish, we can even start with a different griffon, because – as we already know – three breeds of griffons can be associated with each other. However, it should be taken into account that these are large-headed breeds and very often births are performed by caesarean section. Unfortunately, the Polish Kennel Club does not allow griffon bitches to be mated earlier than after the age of 18 months, but it is worth doing it as early as possible.

A Brabantian female dog can give birth to puppies of both her own breed and Griffon puppies – Belgian and Brussels dogs in one litter. It depends on the matching of her and her father’s genes. Before the planned mating, the female dog must obtain breeding qualifications. They can now be obtained in two ways:

The same requirements apply to a stud dog which, however, unlike a bitch, must receive excellent marks.

The price of a Brabantian puppy depends on many factors and can range from a few to several thousand zlotys, although such a high price occurs only when buying a puppy from import with delivery costs. Currently, Russia is a tycoon in griffon breeding. In Poland, griffons are rare, they appear sporadically at exhibitions.