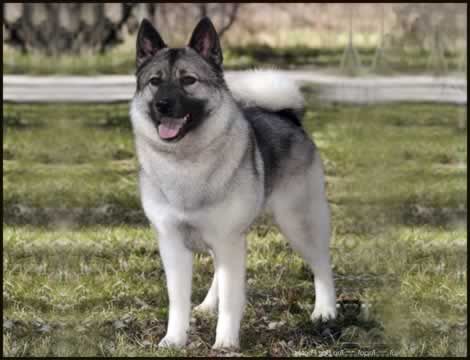 Gray Elkhund, also known as the Norwegian elk dog (Norwegian. elk – moose), is one of the oldest Scandinavian breeds. This dog was used for hunting and guarding by the Vikings. Archaeologists have found dog skeletons with high probability that they belonged to the Elkhunds, and their age is estimated at around 4,000-5,000 BC.

Probably the elkhunds evolved from the associations of the first domesticated dogs, brought by the Vikings from numerous expeditions, with Scandinavian wolves. Over the course of many centuries, several breeds and varieties of Nordic Spitz developed. However, it was not until the 19th century that planned breeding began. The modern Elkhund has been “improved” by mating old Scandinavian Spitz with newer European breeds, but has retained a strong hunting instinct. He can track and preach animals perfectly.

The elkhund gray was first presented at the Oslo exhibition in 1877, and in 1901 the British Kennel Club recognized it as a separate breed. At that time, the first breed standard was also created. The modern FCI standard has been in force since 1999 under the number 242. Currently, the Gray Elkhund is considered by the Norwegians as a national breed and is the most popular family dog ​​in Norway. To this day, it is used for hunting there, and in the Scandinavian countries this breed is under the obligation to work. The first elkhunds came to Poland at the end of the 1980s, but they did not gain popularity and are bred only for amateurs. 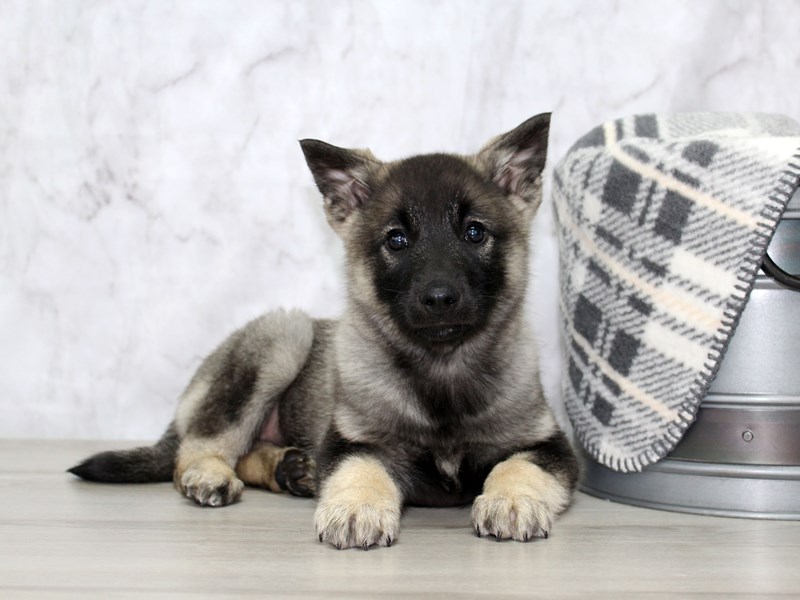 The Elkhund Gray is a dog with a compact build and square body. The head is typical of a Spitz – wedge-shaped, wide between the ears. The length of the skull and the craniofacial skull are identical. Skull slightly arched, with a moderately marked foot. Black nose, tapering muzzle – seen both from above and from the side. Scissor bite, complete dentition. Dark brown, non-bulging eyes. The ears are set high, erect, pointed and small, very mobile. The tail is strong, set high and carried, curled tightly over the back, and must not be carried on either side. In an adult dog, the tip of the tail must not be straight.

The elkhund’s robe is two-layered. The outer coat is of medium length, straight, profuse and dense, the longest on the neck, thighs, tail and back of the legs. On the front of the limbs and head, the hair is short and smooth. The undercoat is dense and soft. Color – as the name suggests – gray in various shades. Black tops of top hair. So it is not a uniform color, as in some other breeds (e.g. Weimaraner). On the chest, abdomen, limbs, underside of the tail and on the waist from the withers to the elbow (the so-called harness, a similar one has a Swedish vallhund), about 5 cm wide – lighter hair, without black tips. Dark mask, delimited by a line running from the eye to the base of the ears. Light gray undercoat.

Elkhund is a medium-sized dog. The ideal height at the withers for dogs is 52 cm, for female dogs – 49 cm. The body weight of the dog is 25 kg, female dogs – 22 kg. Norwegian elk dogs live an average of 12 – 13 years, although older animals can also be found.

Serious defects that affect the show rating are:

Character and disposition of a gray elkhund

The Norwegian elk dog is very social, has a strong herd instinct, which is why it feels bad to be separated from humans. It shows patience with children and tolerates other pets well. However, males may not tolerate the presence of other males. He is gentle and sympathetic towards people, although he is extremely vigilant, so he is perfect for a home guardian. When something disturbing happens nearby, the Gray Elkhund immediately starts barking loudly and intensely, alerting the household. On the other hand, being at home, he is very calm (not to say phlegmatic) and likes to rest alone, without excessive cares. Nevertheless, it needs a daily dose of exercise in the fresh air, regardless of the weather, because it is protected against cold and moisture by thick, double-layered hair.

In Scandinavia, the gray elkhund is a typical working hunting dog. His job is to track down, trap and hold the game until the hunter arrives. It is a very difficult task, requiring both a lot of courage and careful behavior of the dog. It also needs to be agile enough to be able to jump back, so it is very important to feed the hunting elkhund properly to avoid becoming overweight.

The Elkhund Gray is a very independent and independent dog, who likes working in the company of a human. He is intelligent and amenable to stacking, but can be quite stubborn, so he needs a patient, persistent and consistent guide. Socialization as early as possible is also important – puppies should be subjected to it while they are still in the breeding farm with their mother. Starting socialization too late can make training difficult or even impossible.

Dogs of this breed feel best in rural areas, where they can freely go out to a fenced property. Experts believe that elkhund does not feel well in an apartment in a block of flats, as do many other dog breeds that used to be typically working dogs and are now mainly family dogs, such as the schoolboy. Note: elkhund, who cannot bear boredom, left to himself, will find a job – “demolition” in the apartment. If you’re looking for more advice, check out too articles about spitzers collected here.

Elkhund gray is not difficult to care for. However, you need to take care of its thick hair. The dog should be combed regularly with a brush and comb with varying (adjustable) tooth spacing. Elkhund – unfortunately – sheds a lot, especially after winter and autumn. You can then see clumps of undercoat coming out. Although it is not a long-haired breed, such as the schoolboy, usually brushing twice a week is sufficient, while in the period of spring and autumn moulting, the dog needs to be brushed daily. Otherwise, the soft undercoat may become tangled, blocking the airflow to the skin and risking local inflammation. Especially pay attention to the fine hair behind the ears, in the armpits and in the groin, where it is softest and where the most tangles form. These cannot be combed out, it is necessary to carefully cut them out. Before the brushing procedure, you can spray the dog’s hair with a special antistatic preparation that prevents unpleasant “sparking”.

An elkhund bath is not necessary as long as it is regularly combed. Of course, the dog should be bathed if it “gets perfumed” in the impurities. Bath water should be lukewarm, and for washing, a special shampoo for dogs is used, which does not affect the pH of the skin. After bathing, you must dry the dog, and before drying, apply a conditioner that restores light lubrication of the skin and prevents static electricity. Skincare cosmetics are available at good pet stores.

Ears, teeth and claws should also be checked regularly. The ears are cleaned with a cotton pad soaked in the canine ear cleanser. Scaling can be prevented by giving your dog a dental treat to chew on, but if the dog does not cut the claws himself, it is necessary to periodically shorten the claws with a guillotine. “Sleepyheads” from the corners of the eyes are removed with a cotton swab moistened with warm water.

The Elkhund Gray is a healthy, strong and resistant dog. Sometimes, however, some individuals suffer from PRA (progressive retinal atrophy) or cataracts and such animals must not be allowed to breed because they are genetic diseases. Renal and thyroid diseases, as well as hip dysplasia, are sporadic. The Breed Dog Breeding Regulations do not oblige the breeder to screen dogs for dysplasia, but every kennel caring for a good reputation performs such tests.

Like every dog, Gray Elkhund requires regular deworming and preventive vaccinations. The first deworming is carried out by the breeder when the puppies are about 3 weeks old, and the first vaccination is usually at 8 weeks of age. Then the dog is dewormed and vaccinated according to a calendar set by a veterinarian.

As a primitive breed, the Elkhund likes fresh, raw meat the best. So it can be successfully fed BARF. Animal protein should be the staple food, especially for working dogs. With natural nutrition, you can also occasionally serve raw egg, cottage cheese, offal and fish as well as fish fats, as well as vegetables and some fruit. Note: natural meals must be supplemented with vitamin and calcium preparations.

Elkhund can also receive dry and wet ready feed. The price of good food is not low, but it is worth buying from reputable producers who care about the right composition and content of nutrients. When buying ready-made food for an elkhund, you choose the one for medium-sized dogs, and for working dogs – the food for dogs with an active lifestyle, which is more energetic.

You feed your dog twice a day – morning and evening. Regardless of the type of food, the dog should have access to a bowl of water around the clock.

A dog or female dog with passed show marks or breeding inspection may be allowed for breeding. For both sexes, the lower breeding limit is 18 months, although the optimal age for a bitch is two years. A female dog may be mated once in a calendar year, and the last time in the year when she turns 8 years old. There is no age limit or mating limit for a stud dog. The price of a puppy is relatively high, because it is a very rare breed in Poland and the purchase is often associated with going abroad. On average, a puppy costs about 1000 euro plus costs of transport, possibly vaccinations and pedigree – it depends on the contract with the breeder.