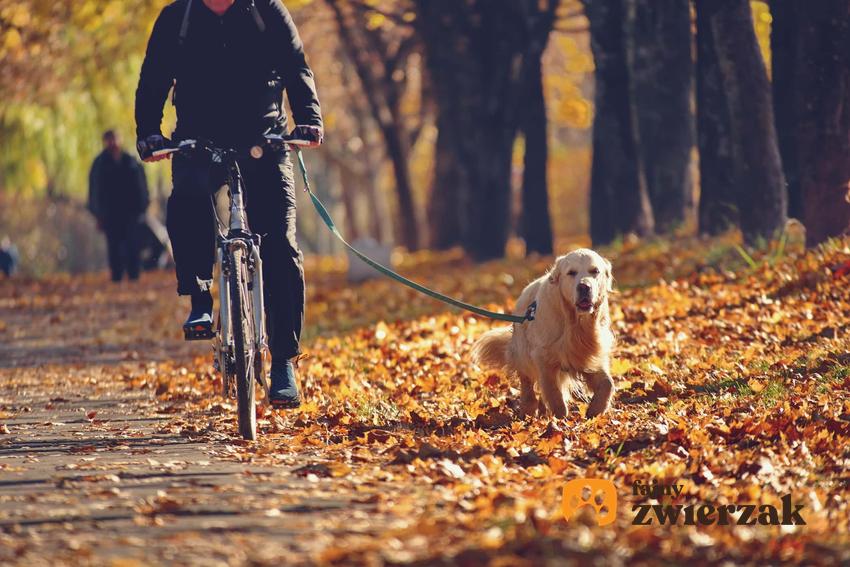 There are many ways to spend your free time with your dog. You can play football with it, swim, throw apport. If we like to ride a bike, we can also engage our four-legged friend to accompany us on bicycle trips. Are all dogs suitable for this and how to ride a bike with a dog?

If you’re looking for more advice and information, check out the articles about walks here.

Walking a bike with a dog – rules

There are no regulations in the Polish road traffic law regulating driving a dog next to a bicycle. In any case, it is not forbidden and many dog ​​owners take advantage of the possibility of combining a bicycle trip with the amount of exercise that is so important for a pet. However, since there are no regulations, it is not established whether the dog must have the leash fastened when it runs next to the bicycle.

In any case, full responsibility for traffic safety rests with the owner of the dog, so when taking him on a bicycle, it is worth following logic and common sense, and on country and field roads – also local government regulations. First of all, the dog should have a leash, but the leash must never be tied to the handlebars of the bicycle. This is very dangerous as the dog may suddenly spot another dog, cat, bird etc. and jerk to start chasing. Doing so may cause you to lose control of the bike and tip over, which could result in serious injury to both the rider and the dog.

It is worth getting a special lanyard and a bicycle holder, and if necessary, keep the leash in your hand. Correctly, the dog is always running on the right side next to the bicycle. In this way, it is protected against vehicles overtaking the bike on the left side. If local regulations permit the dog to be released loose on side roads, this can be done as long as the dog is obedient and returns when called. However, it should be remembered that it is always forbidden to release the dog without a leash in the forest.

Dog breeds suitable for running alongside a bicycle

Large and medium-sized breeds are widely believed to be the best for cycling. Perhaps this opinion has become entrenched because most amateurs of cycling with a dog have dogs of such breeds. However, there are no restrictions on this matter. Every dog ​​owner can try how to ride a dog on a bike.

In general, a dog must meet several conditions to run alongside a bicycle. First of all, it must be completely healthy and functional. Cycling is definitely not for puppies and very young dogs, as well as senior dogs and overweight pets. Brachycephalic dogs (with a flattened, short muzzle) are also not suitable for running. Small breed dogs can play the “cycling” sport, but they must not be taken for longer distances due to the relatively quick fatigue.

It is best to take a dog of the following breeds for a bicycle walk:

How to ride a bike with a dog – science, precautions

How to teach a dog to run next to a bike

The most important thing is to check your dog’s reaction to the bike. If he does not pay attention to passing cyclists and does not try to chase him – this is the beginning of success. It starts with walking the bike out and summoning the dog. If he comes and sits down freely, reward him with a treat. After a few such exercises, you can go for the first walk. The dog should be in a harness (not a collar!) And on a leash, and should not eat before the walk.

We choose the straight path for our first walk. First we go on foot, leading the bike with the dog tied to the handle with a leash. If the dog is walking calmly, get on the bike and ride for no longer than 5 minutes. We closely observe the dog and control the speed of travel – it should be such that the dog runs at a free trot. If he is galloping next to the bike, it is imperative to slow down and think about how to calm down the dog – it will probably be best to take a break, give him a drink, stroke him and let him rest.

Gradually, every day we raise the degree of difficulty and extend the distance and time. It is enough if the walk will be longer by 2-3 minutes each day. Only after a few weeks of training will you be able to go on a longer trip. During the walk, you need to take breaks and let the dog drink water, which you take in a bottle or water bottle with a bowl. We do not continue driving immediately after the dog drank, you have to wait a dozen or so minutes. It’s safe because of his stomach.

We start learning to run with a bike at the age when the dog’s skeleton is already formed. Keep in mind that the larger the breed, the more prone to hip dysplasia it is. Excessive effort at an age when the osteoarticular system is not yet fully formed may lead to its deformation. It is not true that an adult dog cannot learn to run with a bike. For the same reason, you should not force even a dog experienced in running next to a bicycle, and dose the effort safely.

If we plan a bike trip, the dog should not be fed directly in front of it. If we leave very early in the morning, better not eat anything. However, if the start is scheduled at noon, the dog should be given a meal with increased energy (carbohydrate) value early in the morning. After returning and waiting at least an hour, we feed the dog a meal containing mainly protein to regenerate the muscles.

As a general rule, do not feed your dog right before and immediately after exercise. You need to be especially careful with large breeds that have a tendency to twist their stomachs. This ailment can affect a quadruped after exercise with a full stomach and is a direct threat to life – immediate surgery is absolutely necessary to avoid necrosis of the digestive system organs.